Luke Buffini was born in Hammersmith, London in 1992 and grew up in a suburb called Hillingdon. He has published work elsewhere in Earth Island Journal, the Hillingdon Literary Festival Anthology and Phi Magazine. He currently lives in Highgate with his girlfriend, where he works as an English and Philosophy tutor. 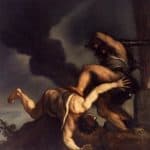 The Literature of Violence and its Politics