K.R. Segriff is a Canadian poet, filmmaker, and visual artist. Her work has appeared in Greensboro Review, Prism International, and Best Canadian Poets, among others. Her short films have appeared in over fifty film festivals worldwide. She won the Space and Time Magazine Iron Writer Competition, The London Independent Story Prize, and the Pulp Literature Bumblebee Prize for Flash Fiction. She has been working for far longer than is reasonable on her debut poetry collection. 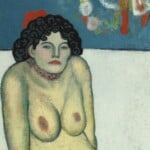 Not Your Bitch, Picasso