Sergey Gerasimov is a Ukraine-based writer, poet, and translator of poetry. The largest book publishing companies in Russia, such as AST, Eksmo, and others have published his books. His stories and poems written in English have appeared in Adbusters, Clarkesworld Magazine, Strange Horizons, J Journal, The Bitter Oleander, and Acumen, among many others. His last book is “Oasis” published by Gypsy Shadow. The poetry he translated has been nominated for several Pushcart Prizes. 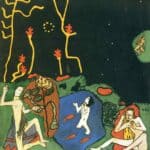