Swapnil Dhruv Bose is an undergraduate student of English Literature at Presidency University, Kolkata. In his spare time, he grows disillusioned and writes about it. He is a film columnist at Far Out Magazine, UK. His poems have been featured in literary journals like Lucky Jefferson and Asterism. He hopes to be a professor of postmodern literature someday. 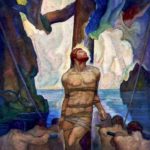 Tennyson’s Ulysses As A Metafictional Romp